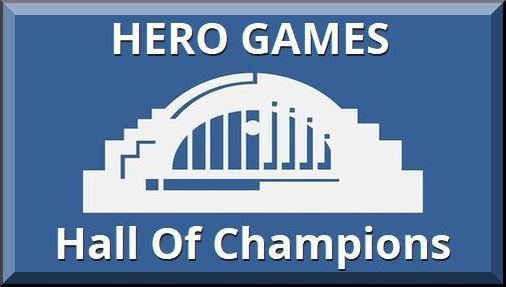 Welcome to the Hero System Hall of Champions!

Looking for content or inspiration for your Hero System campaign? Or maybe you want to publish adventures, villains, powers, equipment, or settings you’ve created for your own Hero System games?

What Kind Of Products Have Been Published For the Hero System?

Or, if there hasn’t, you can use this program to fix that oversight!

The Hall of Champions provides a variety of free resources for publishers, including logos, templates, and artwork. Publishers are free to use these resources, or to build their products from the ground up with their own graphic design, layout, and illustrations. If you’re interested in our creator resources, they’re listed among the products for the program (they’re free). After creating your title as a download-ready file, visit your account page and look in the "My Content" section. There you will find the link "Add a new title". You must agree to the Community Content Agreement in order to upload your new title. After publication, all Hall of Champions content is available here. You can check sales history, view reviews and fan discussions of your work, and book royalties through PayPal by clicking on the Account tap at the top of the page and selecting My Content.

Publishers may set any price they wish for their products, or make them free. Hall of Champions products are subject to the standard DriveThruRPG commission, and a portion of the selling price will be paid as a royalty to Hero Games Revenue from Hall of Champions content is split between you, OneBookShelf (the company that manages DriveThruRPG), and Hero Games. You take half of the revenue and we divide the rest between Hero Games and OneBookShelf.

There are some restrictions on what you may or may not publish at Hall of Champions, which are outlined below. Please read them carefully, and follow them to the best of your ability. They cover both the use of Hero System/Champions rules, as well as the use of settings and other intellectual property belonging to Hero Games.

Versions Of The Hero System And Champions

There are currently five versions of the Hero System or Champions which Hero Games has or will publish that are available for your use. All of these variants are available for you to use as part of Hall of Champions, though you do not have permission to reprint any of the core rules from any version under the community content license. All products created with a specific version of the Hero System/Champions rules must be specifically labeled as such in their title on DriveThruRPG: for example, Super Hero Product (4th Edition), Super Villain Product (Champions Classic), and Fantasy Hero Product (6th Edition).

Additionally, examples of material for all of them are or will be available through DriveThruRPG. In most cases every product for a particular version ever published is available through DriveThruRPG (they number in the hundreds). They are as follows in chronological order of publication and including the listed core books which may be of use to you:

There are a variety of different exciting proprietary settings available for you to create content for. If you create original content derived from the Champions Universe Timeline (to be described below), that original content belongs either to Hero Games or Cryptic Studios. We have the rights to sell the work, and we also have the rights to its contents for future works. But if you are publishing original work, we have the right to sell the work as created for the Hero System, but you retain the rights to the contents. So, for example, if you wish to release twenty pages of non-setting specific supervillains for both Champions and Mutants & Masterminds, we don''t claim those villains as our property: only the rights to sell the Hero System version of the work.

The following types of content may be submitted as part of Hall of Champions.

Custom Settings: Do you have a homebrew Champions or Hero System setting you would like to share with others? Feel free to do so using Hall of Champions and let others experience the wonder and creativity of the world you’ve created!

Proprietary Settings: Expand upon the Champions Universe Timeline by providing new characters and setting information, or by expanding upon existing or little-detailed information from our books.

Equipment: Share your gadgets, vehicles, weapons, robots, bases, and other artifacts you’ve created with other fans using the Hero System.

The following types of material cannot be published as part of Hall of Champions. If you wish to publish this type of content, please contact Hero Games directly to inquire about additional third party licensing.

Core Rules: There can be no reproduction of any part of the core rules from any edition of the Hero System or Champions as part of Hall of Champions. You have permission to create content using these rules, not reproduce them!

Rules Variants: You do not have permission to publish your own house rules or variant of the Hero System.

Other People’s IP: You do not have permission (or we the right) to release work based on the intellectual property of other people or companies as part of Hall of Champions. If you wish to for example show other fans your Champions 6th Edition write up of DC Comic’s character Green Lantern, please do so FOR FREE on the Hero Games website forums (https://www.herogames.com/forums/) or in some other location. But not here!

What Writer’s Guidelines Can You Offer?

1) Write a good RPG product. A fun one. An unusual one. The kind that, if you purchased it yourself, you would feel like you got a good deal.

2) Make it look cool. Awesome. Professional, quirky, sleek, or punk rock. It really doesn''t matter. Make something you would feel proud to have in your own digital library.

3) Craft it so that a parent who purchases it for their clever and beloved 12-year-old child will feel comfortable.

4) Have an editor check your grammar and spelling. Have an expert Hero gamer check your write ups. (Maybe you're one or both of these things yourself.)

5) Don''t have artwork that is or boarders on the pornographic. Woman like to buy games too! In fact, they are the fastest growing demographic in RPG gaming. So don’t be a slob.

What Legal Stuff Is Required For Publication?

All Hero System/Champions creations published in the community content program must contain the Hero Games Hall of Champions logo on the lower right hand corner of its cover image. It must also contain the Copyright Text listed below.